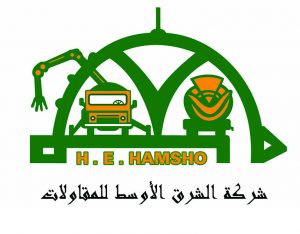 In 1989, Hamsho Group for Trading and Construction started its subsidiary Middle East Contracting Company and the Mediterranean House of Marketing for the production of galvanized concrete. It started in the field of contracting and production of concrete concrete. This was the start in the field of residential and governmental buildings and then expanded in a few years to include other areas including road construction, Water, water and telephone lines.

In the course of the work, the Group decided to rely on itself to secure the needs of the projects it is implementing, especially its needs of machinery and engineering equipment. The Group owns drilling and dredging machines (torsos, bulldozers, bunkers and scaffolds), screeds, rollers, water tanks and pumps of various capacities and other necessary mechanisms

Since the concrete works are the foundation of most projects, the Group has ensured that the central automation mechanism (advanced computer programs) and mixer (s) are equipped with modern vehicles with various capacities to transport the galvanized concrete to the casting places, and the modern and advanced stationary and mobile pumps Up to 150 meters high.

A number of vital projects have been implemented in Damascus and its suburbs, which have contributed significantly to the community, including large residential complexes projects and expansion projects in faculties of the University of Damascus and other private universities.

We have implemented many construction projects that need technical and considerable experience in implementation, such as the Herna Housing Complex of the Cooperative Society for Political Science, which consists of 15 buildings with 254 apartments, as well as the telephone building in Al Thawra Street, where the structure was fully implemented. The expansion of the College of Science, which consists of seven blocks of connected buildings, a metal bridge between them and many resort projects and hotel expansion, is under way. The company uses high technique in execution using German-made metal molds, Its capabilities are adopted and used by the company in the implementation of its projects due to the result of its use of quality and speed in delivery.

In addition, we are currently in the process of implementing the stock market building in the development of the Eighth Gate – Yafour area of ​​Emaar Syria. This project has geometric shapes represented in the circle, arches, hexagons, On the implementation of the metal template ready and has given this method of implementation quality is unparalleled and accurate in implementation.

the project is currently being implemented in the development of Gate 8 – Yafour area of ​​Emaar Syria -The company also carried out the construction work of the Yasmine Rotana Hotel, Damascus-Al-Mezah, which is being implemented by Middle East Contracting Company. In our direct relationship, we are technical and commercial agents of one of the leading German companies in the technology of executing buildings of a special nature, which requires special molds for the formation of walls, ceilings and columns of

concrete, we carry out the various works with the highest quality and speed.